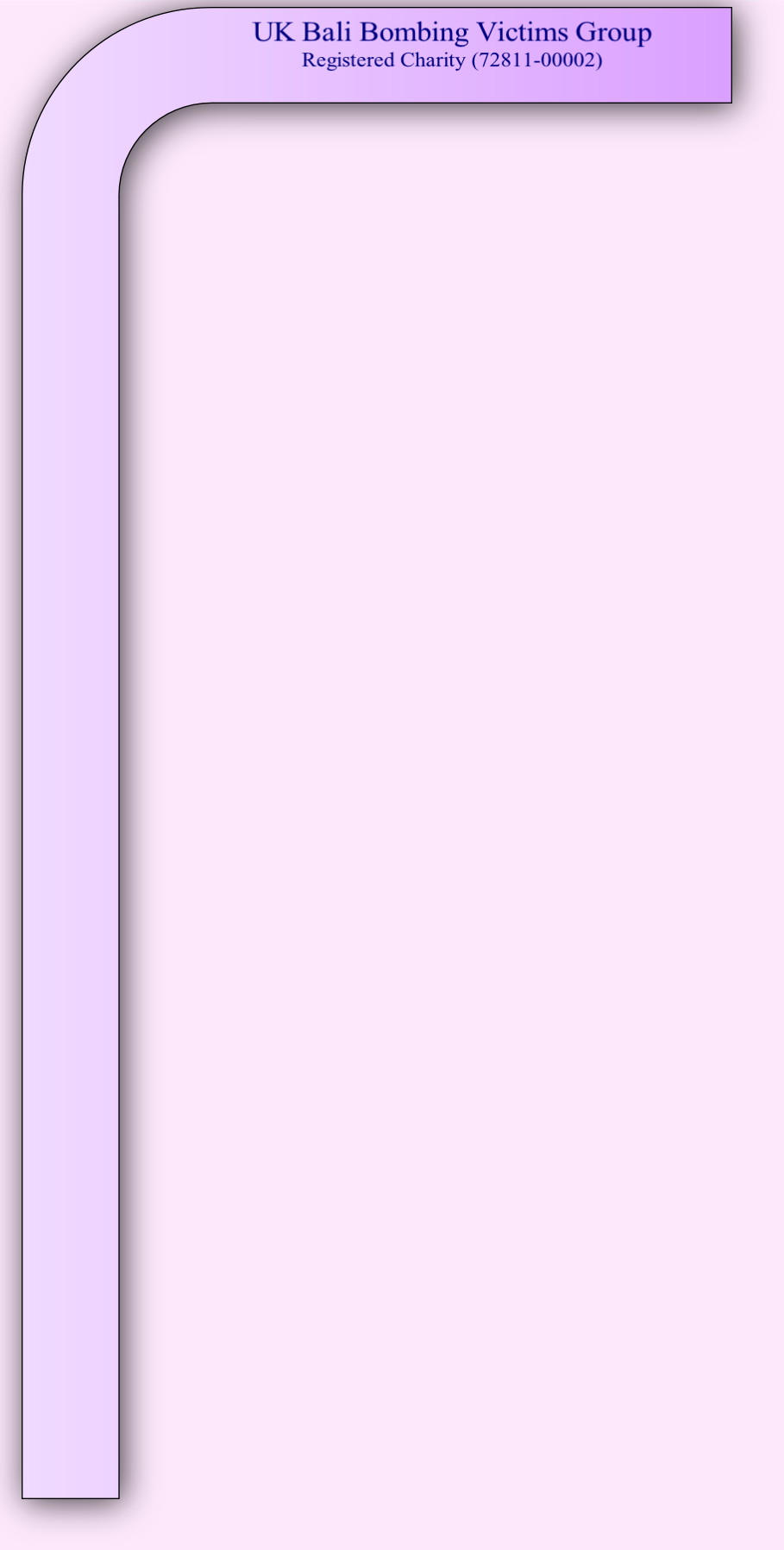 16h August 2006
The Department for Culture, Media and Sport (DCMS) have said that “CICS is currently being reviewed by the Home Office. The consultation stage has now closed, but, if you're interested, you can still see the consultation document at http://www.cjsonline.gov.uk/the_cjs/whats_new/news-3258.html. The Home Office is now looking at the responses to that consultation and developing it's proposals for change. However, they are focused on addressing the amount of time it takes to make a claim and to minimising the paperwork involved with CICS. It's probably quite unlikely that any changes will be made to extend CICS compensation to people caught up in terrorist attacks overseas”.
Instead, it is increasingly likely that British victims of terror abroad will only be compensated through a new charity - see here for details.

25th october 2006
The 7/7 London Bombings charity fund set up to help victims of the 7 July bombings has been wound up after handing out £12m in grants.
“Blair has failed us”, say British families of Sharm-el-Sheikh holiday terror attack victims

10th December 2006
The Armed Forces' Criminal Injury Compensation (overseas) scheme is to be modified to provide criminal compensation for  “civilian situations”.
“Until now, the MOD has paid "criminal" compensation only for incidents where troops were injured in "civilian situations" such as a fight in a nightclub while off-duty.”
“The new ruling and expansion of compensation to the Iraq and Afghan conflicts means insurgents or terrorists launching surprise attacks and sabotage missions are also regarded as criminals and not enemy troops. ”
See the Telegraph’s article in full.
After the 7/7 London bombings the Daily Mirror campaigned on behalf of the victims for greater compensation payments. For example, the paper reported on Martine Wright, who lost both her legs, that she would only be compensated £55,000 per leg. I (Paul Lawrenson who lost half an arm in Bali) pointed out to the Daily Mirror that he’s not entitled to any compensation from the CICA because he was blown up abroad.

On March 13th 2006 the Sun newspaper reported on further unfairness of the CICA scheme towards British victims of terrorism abroad. The article is shown below.

Also the BBC’;s Fiona Bruce “The Real Story” program dedicated 30 minutes for the cause. Peter and Maggie Stephens courageously participated in that program. Also Trevor Larkin and other victims of the Sham el-Sheik bombings were heavily featured.

You can pledge your support by lobbying your MP to sign the Earl Day Motion Early Day Motion on COMPENSATION FOR BRITISH VICTIMS OF TERRORISM ABROAD. You can easily locate your MP from here or from here.

Description:
Number of Pictures: of